Continuing in the series, we provide our fourth paper on the Draft Phase 3 Planning and Design Code (“draft Code”) which is subject to public consultation until 18 December 2020.

This paper focuses on the introduction of additional Subzones, contributory items as Representative Buildings and changes to demolition criteria introduced for heritage buildings in the Historic Area Overlay.

Subzones are a layer of policy within the Code that sit within Zones, with policy that is intended to reflect local circumstances of specific areas. Subzones are similar to Policy Areas within Zones in Development Plans. Whilst it is counter-intuitive, it is important to note that in the hierarchy of the Code policy, Subzones sit below Overlays but above Zones.

In accordance with the Phase Three (Urban Areas) Planning and Design Code Amendment Summary of Post-Consultation Amendments November 2020 report (“the Report”) the number of Subzones from the original Phase 3 consultation version of the Code (“original Phase 3 Code”) has increased in the draft Code.

On review of the draft Code, the original Phase 3 Code and the current Phase 2 version of the Planning and Design Code (“the Phase 2 Code”) we note that:

The following table provides a comparison of the Zones and Subzones between the draft Code and the original Phase 3 Code and the Phase 2 Code (purple represents the Subzones that have been removed. Green represents new Subzones). 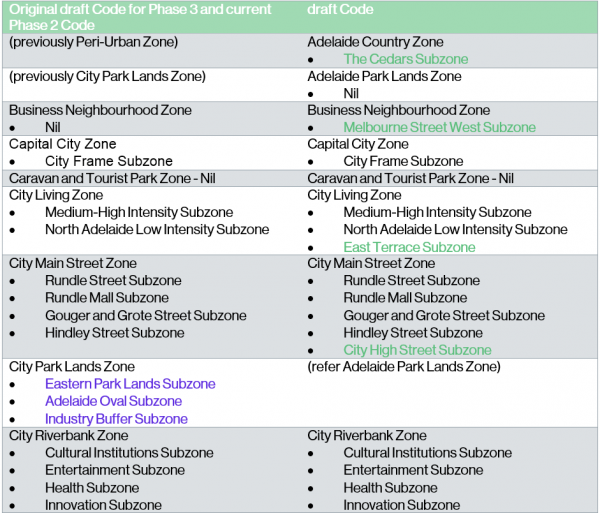 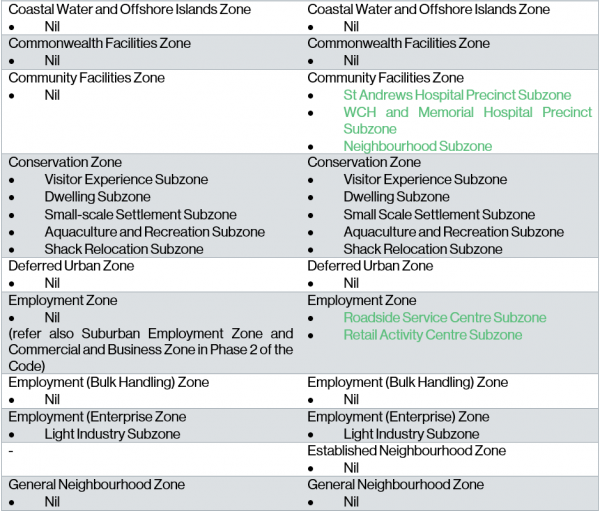 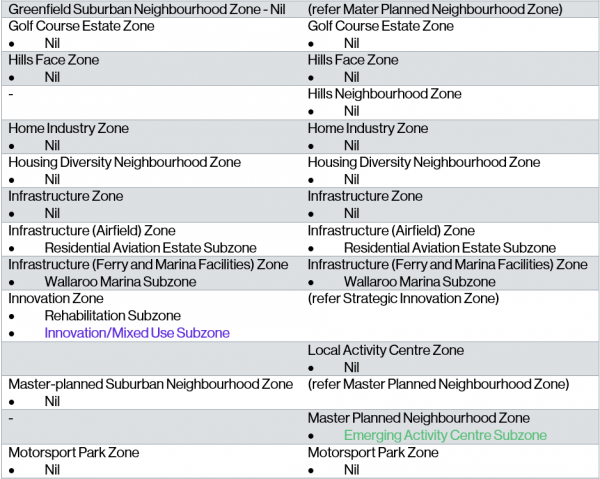 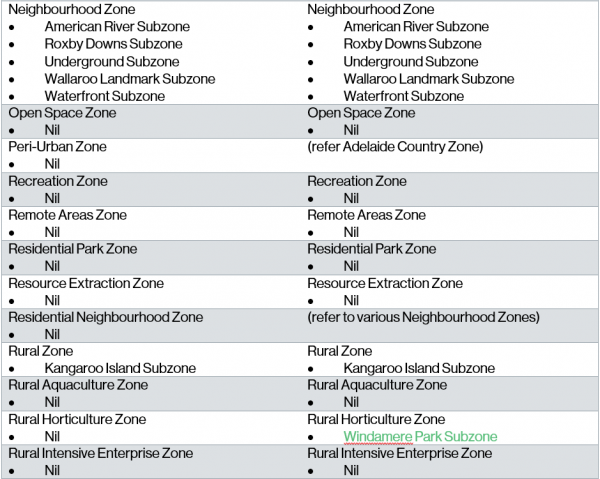 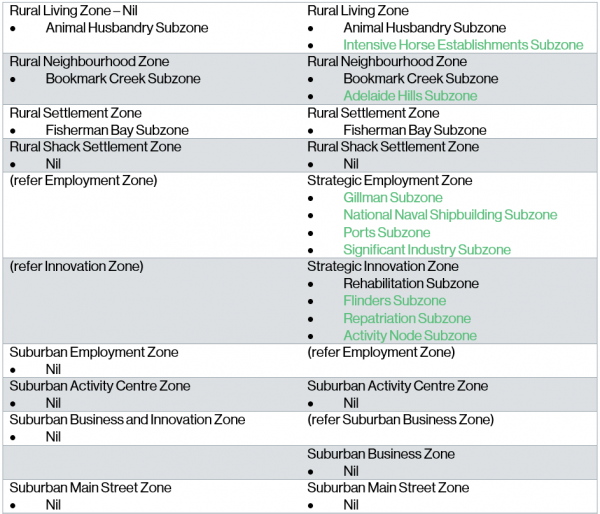 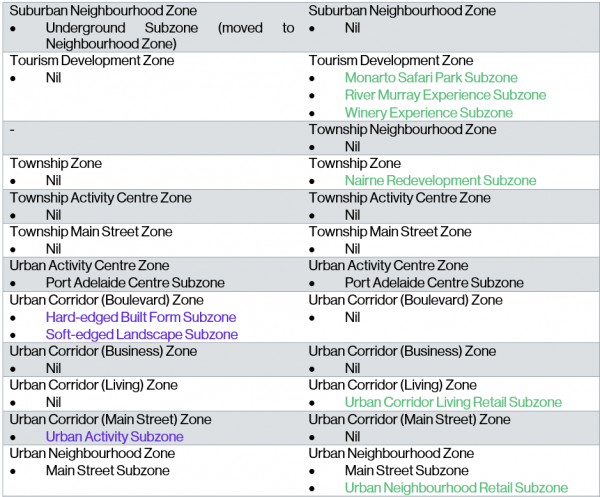 The additional Subzones, coupled with the new Zones, in the draft Code will see a considerable amount of new policy introduced into the Code. We encourage councils to review the Subzones (that are proposed or should apply within the council area) and the mapping to ensure that Subzones apply to the relevant areas and contain appropriate policy for assessment of development.

Councils may also wish to recommend further Subzones for inclusion if areas with specific or unique characteristics are not represented by the existing/proposed Subzones or Overlays.

Representative Buildings are defined in the draft Code as follows:

The rules of interpretation for the Code means that it will operate in conjunction with SAPPA and other related databases. The purpose of this is to enable spatial and textual data to be brought together in the SA Planning data base on Plan SA.

You can search the Representative Buildings on SAPPA (training version) as follows:

Step 1: Click on “Layers” and open the drop-down menu for “Planning and Building” 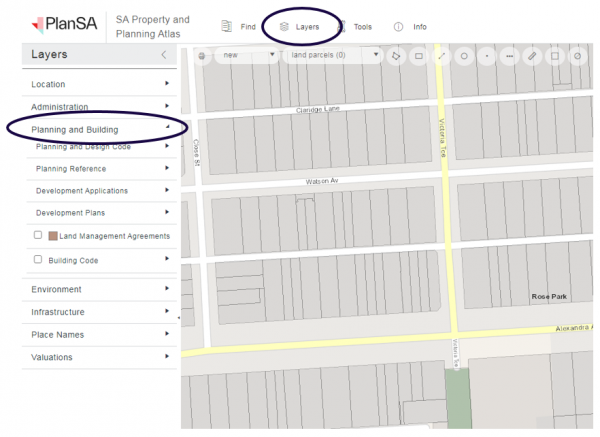 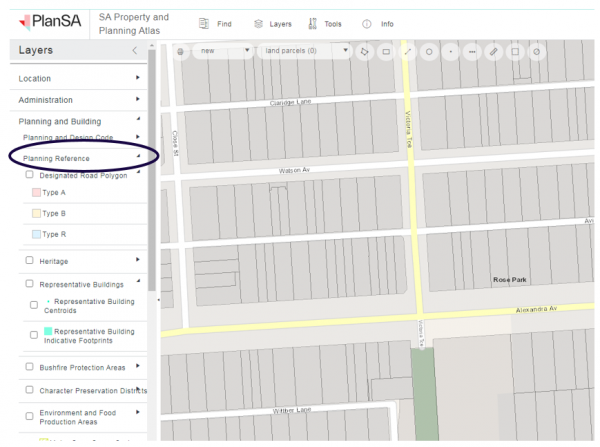 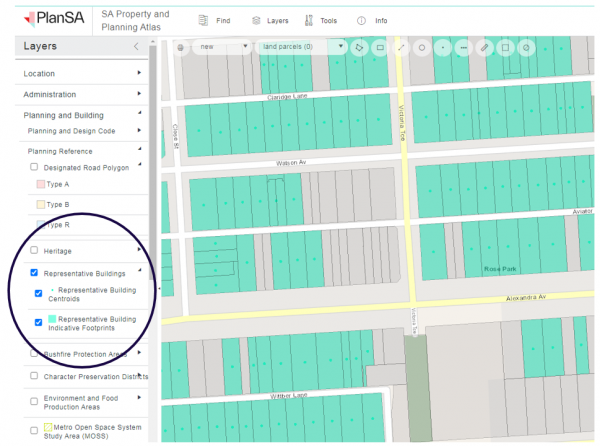 Where current contributory items are not located within the Character Area or Historic Area Overlays, these buildings will not be it captured in the draft Code as Representative Buildings. To capture additional Representative Buildings adjustment to the boundaries of the Historic Area and Character Area Overlay is proposed. However, it is not clear where the newly adjusted boundaries will apply.

We encourage councils to review the Character Area and Historic Area Overlays and Statements and provide feedback on Representative Buildings that should be included in the Statements and identify locations where the Overlays should apply.

In response to submissions received during the first round of public consultation and concerns raised in respect of protection of heritage and character the following is now proposed as part of the draft Code amendments:

For further information regarding the draft Code, please contact:

LINKS TO PAST PAPERS: